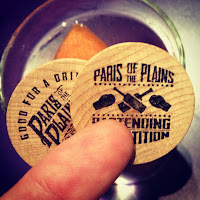 True story: Back in college and on one of the many occasions I was short on cash I had the bright idea to place a classified ad in the local paper (people, this was pre-internet) offering my bartending services for private parties. My qualifications for this service? Less than zero. Not only was I underage, but I had never mixed anything more complicated than a Screwdriver in my life. The foibles of youth. Anyway, someone actually calls me and I get a gig at some random, newly minted dentist's birthday party. I tried to memorize some cocktail recipes beforehand but ultimately wound up winging it all night long. I learned many things that night. Among them:

Read more »
Posted by Kevin Marsh at 4:43 PM No comments: