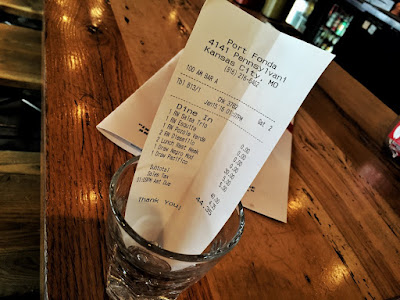 With apologies to Charles Dickens, the ten days that make up Kansas City Restaurant Week (#KCRW2016) are arguably the best of times and the worst of times for all involved.


The worst because:
Let's address that last one because as a diner you can fix that problem with minimal pain and effort.

Unless you've been living in a cave most of your life you probably already know that servers and bartenders make the lion's share of their income through tips. Regardless of how you feel about this arcane wage system that's how it works and there's no justification in enacting a pay cut on your server just because your meal is discounted. Take a look at my Restaurant Week bill (photo, top of post) from lunch at Port Fonda yesterday. Like all KCRW2016 lunches the price was $15. There were two of us, $30. Two beers at $5 each makes a total of $40 (before tax). Standard tipping practices at 20% suggest an $8 tip. Had this not been KCRW2016 the same lunch would have cost us roughly $65 - resulting in a $13 tip. So, the server's effort is exactly the same but he or she took a nearly 40% reduction in pay. Not bueno.

This is usually where people start showing me their buts...
I'm not buying your buts. I agree that the math is imperfect but the underlying logic is sound. Trust me on this one. Be a good dining citizen and tip at 25-30% during KCRW2016. Your savings remain very real and your server can still make rent.