Start Your Sunday With Brunch at Story 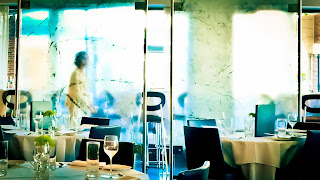 Sometimes you find restaurants (even the obvious ones) the strangest ways. Last Saturday I had the pleasure of running the half-Marathon portion of the Waddell & Reed Kansas City Marathon and unexpectedly found myself in a pace group with my friends Andy and Laurie. We were cold (temperature at start was 34º F) but working hard, burning calories and talk eventually gravitated toward food in general and KC restaurants in particular. We compared favorites (too many to list), bemoaned the dogs (not going there) and tried to come up with a recommendation that one of us hadn't tried. Eventually Andy asked, "Have you tried brunch at Story?" I had not.

A couple of things worth mentioning at this point. I have had a "started out rocky but now moving in the right direction" relationship with Story. Located only about a mile from our home, my wife Shelly and I were excited when they opened in May 2011. Call it bad luck, bad timing, bad karma, whatever... we ate there several times and just weren't impressed. Now, Story is located directly across the street from our very favorite local restaurant, Cafe Provence [related posts], so it was easy enough to ignore the upstart. As the months wore on however our friends were always talking the place up. "Have you been to Story?" "You've gotta eat at Story." Blah, blah, blah... Then it happened. After this year's Prairie Village Art Fair we decided to give it a go and wandered in with some friends. So glad we did. I remember thoroughly enjoying a wonderful soft-shell crab and I'm a Maryland boy with a pretty high standard for that sort of thing. Service and atmosphere were much better than I remembered from previous visits. Several months later we returned for dinner. The roasted beets with smoked walleye still make my mouth water. Innovative and delicious coupling of flavors.

So, it wasn't a stretch that brunch was being recommended to us by our friends. Not wasting any time we went the next day.

Brunch at Story is a Sunday-only affair and it's available from 10:00 AM - 2:00 PM. Located in the Prairie Village Shopping Center the restaurant is white tablecloths in an atmosphere that exudes modern but comfortable elegance. An abundance of north facing windows provide a nice degree of natural light without that annoying squint factor. It's a nice space. 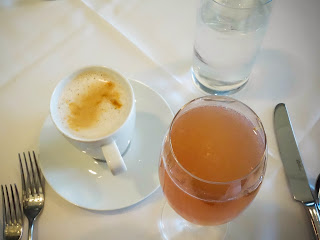 Service begins with a small basket of Chef Carl Thorne-Thomsen's homemade bread. Let's face it, fresh bread on Sunday morning is a very good idea. Drinks include fresh squeezed orange and grapefruit juices, coffee and espresso drinks, and several breakfasty cocktails. I chose a latte and a grapefruit bellini (sparkling wine and fresh squeezed grapefruit juice) and could have enjoyed several of both but stopped at one each. Sigh.

We were there at 10:00 so breakfast was my leaning but the soup sounded too intriguing to pass up - Lentil soup with smoked mussels and caviar. The soup was thick, almost porridge-like with these wonderful little smoked mussels providing flavor and texture. I'd hoped for more brininess from the caviar but it seemed to just fade into the rest of the dish. I would order it again though (more caviar please?).

Chef Thomsen is a busy man. In addition to baking the restaurant's bread he also makes his pastas in-house. It was with that in mind that I ordered the Linguini (fried eggs, pancetta, spinach, pecorino romano). If the photo below does anything for you I suggest you order one. It tastes even better than it looks. Think of a pasta carbonara laid gently onto two perfectly cooked sunny side up eggs. I think there was a hint of chicken broth as well. Whoa!


There are a number of tempting sides including ricotta fritters, housemade doughnuts, housemade sausage, and so on. We opted for a small bowl of hashed potatoes and asked for them extra crispy. Shelly is the fried potato aficionado on our team and gave them a thumb's up. I liked them too but couldn't help thinking they'd be better with a runny fried egg or two broken over the top (what can't be improved this way?).

Like the linguini, the Smoked Duck Empanadas (crispy poached eggs, black beans, avocado) is a dish that bridges breakfast and lunch - not existing entirely in either realm. The plate arrives and you recognize the duck empanadas right away. Where are the eggs? Surely it's not those breaded orbs that resemble small whole potatoes. Cut into one however and voilà, you've discovered a perfectly poached egg that's been coated in panko crumbs and flash fried. Runny yolk goodness ensues. 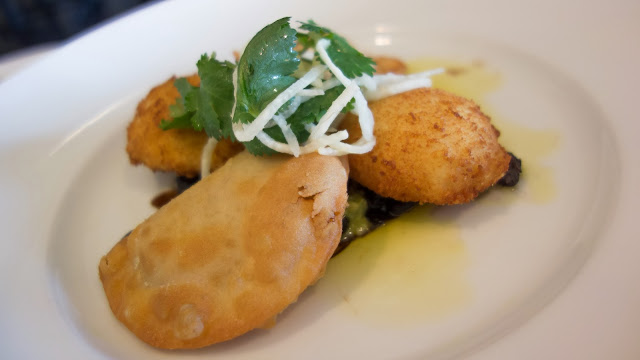 All in all, a great way to start my Sunday. Look for me there again. Soon.