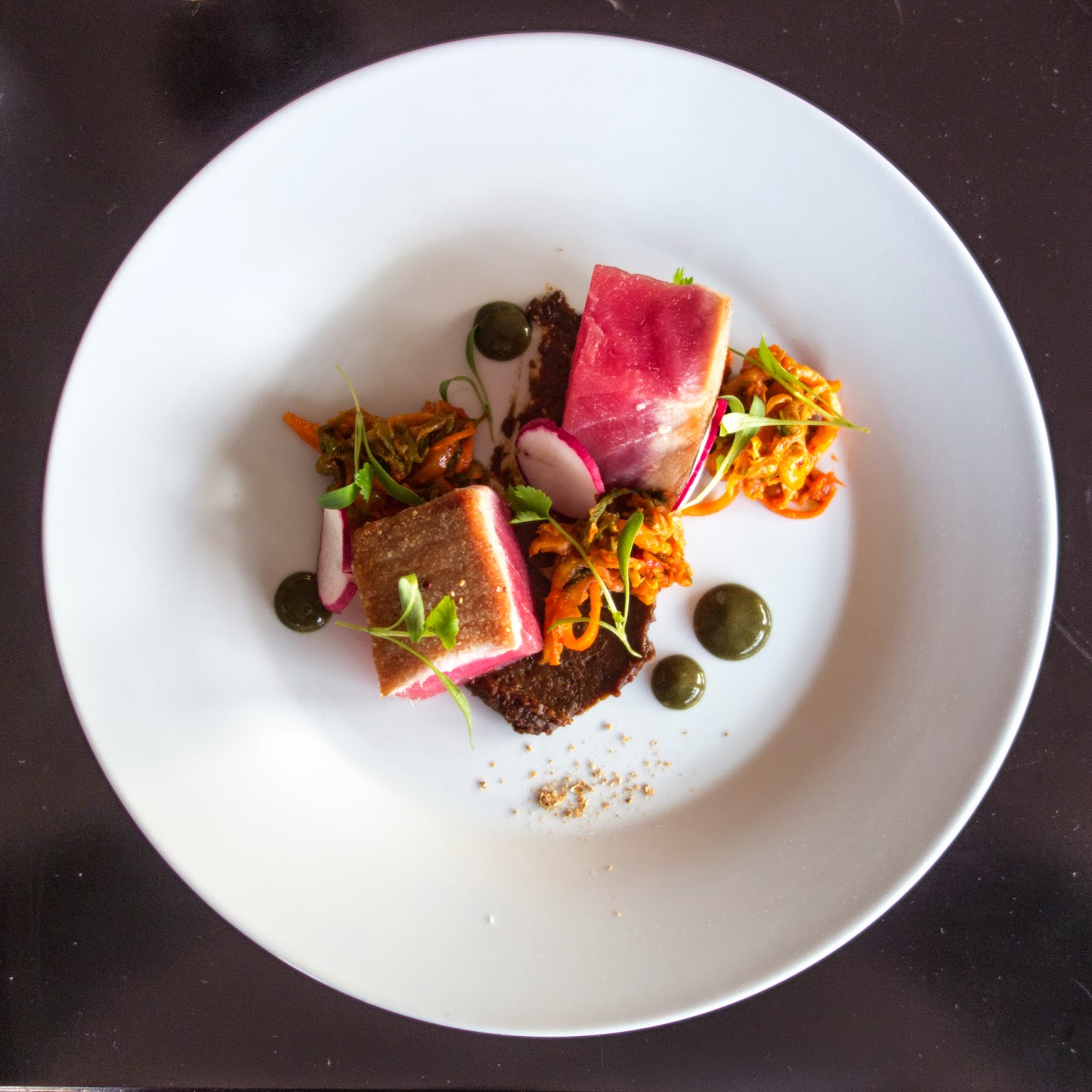 
UPDATE: 6/24/14 - Chef Kasper is no longer at Kansas Town. Look for him at Lulu's Asian Bistro opening later this summer in Westwood, KS

On why he no longer dined at Ruggeri's, a St. Louis restaurant, Yogi Berra famously explained, "Nobody goes there anymore. It's too crowded."

It might be said of Kansas Town, "Nobody goes there yet. It's always empty."

There are any number of reasons that a restaurant might be empty. The most insidious reason is simply - it's empty because it's empty. Dining at a restaurant is not merely about eating food prepared by others. The whole process is theater. Attentive service, quality food, attractive plating, and buzz. Diners typically crave the company of other diners. There's always a point where too many patrons means slow and inattentive service but ultimately dining out is a social occasion and being surrounded by like minded people is a big part of the fun. So it stands to reason that potential diners walking by Kansas Town might just keep walking when faced with the thin crowd.

And that's a shame because there are some very good reasons to eat here.

Kansas Town opened in the old Macaluso's location (39th and Terrace) in late January. Owner Mike Bechtel has done a nice job creating an inviting, well decorated space but it still feels like a work in progress. The bar, which has come a long way since February, feels a bit like something you'd find in a nice Johnson County suburban home. Liquor bottles are clustered at one end of the bar presumably waiting for a proper shelf someday soon. No regular bartender - except on Thursday and Saturday. That said, my Manhattan was perfectly fine. Not mind bending, but this is not a craft cocktail destination. The wine list is solid and well balanced. Decent selection of wines by the glass and a good cluster of bottles in the $24-$40 bracket.

On my first visit to Kansas Town in late January I ordered a Flat Bread Bánh Mì and was blown away by the flavor. That was followed by an artistically plated and equally tasty Beet Tarte Tatin. Despite being open only about a week it was quickly obvious that something special was going on in the kitchen. The driving force it turns out is Executive Chef Garrett Kasper. The 27 year-old Kasper comes to Kansas Town (and Kansas City) by way of an 18 month stint as Chef de Cuisine at the award winning La Table Provencal in Virginia's Shenandoah Valley. This is a great catch for Kansas Town as Kasper is a very talented chef, expertly using unlikely combinations of ingredients to produce very memorable dishes. In addition to outstanding flavors his plating (how pretty the food looks) rivals what you will find at local gems The American and Bluestem.

The menu is smallish - about 4-5 appetizers, 5-6 main plates, and 2-3 desserts. Small menus are good if they change often and I'm pleased to report that this menu is pretty dynamic. According to Kasper this will be even more true as the weather warms and more fresh choices are available at the local farmer's markets. The prices are modest. Maybe too modest. They probably represent one of the best values in town right now and this level of cuisine is not typically sought out because it's a bargain. (See menu at bottom of this post).

On a recent visit we started with a bowl of Wild Garlic Soup. Poured table side it was a deliciously creamy (but made without cream) mélange of flavors drawing from wild garlic, turnip, green onion and potato. I've been on a bit of a tear recently when it comes to octopus. If it's on the menu I order it. Kasper's was appropriately tender and served with a plantain and black-eyed pea fritter that nearly stole the show. And that little detail is what makes me want to return - plates that provide pleasant surprises around the edges and are not simply carried by a central piece of protein. This was true also of the tuna I ordered - perfectly seared thick cubes of tuna accompanied by some of the tastiest kimchi I've eaten outside a Korean restaurant. Our evening finished with cheesecake (also prepared by Kasper) that included cayenne, maple, and dark chocolate. Wow.

My suggestion? If you love creatively prepared and artistically presented food get here. The best workaround to the lack of fellow diners is to bring your own crowd. 4-8 people at a table could do some serious sharing.