I recently posted about the Paris of the Plains Cocktail Festival held in Kansas City a couple of weeks ago. One of the highlights of this five-day event was a very special dinner held at The American Restaurant. The theme was "Beertails vs. Winetails" and I was pretty intrigued by the invite (see below).

First of all, I had been looking for a good excuse to visit The American and try out new Executive Chef Michael Corvino's craftwork. Corvino is the latest in an impressive list of executive chef's at this storied Kansas City icon that includes James Beard Award winners Debbie Gold, Michael Smith, and Celina Tio. Corvino's menu for this event was a hybrid of items from his new dinner menu as well as a few courses designed specifically for this meal. Seeing items from the standard dinner menu was a nice surprise as it's not unusual for restaurants to simplify menu items when hosting a banquet-style event. A copy of our menu is below. None of the courses disappointed and the Cold Poached Lobster and Slow Roasted Pig were (IMHO) stellar.

I was also more than a little intrigued by the concept of Beertails and Winetails - somewhat awkward terms for cocktails made with beer and wine respectively. This is certainly not a new concept (think micheladas or sangria) but cutting edge bartenders are taking the concept to new and exciting levels. That's what I wanted to see (and drink).

One of our hosts, Doug Frost, was a known quantity for me. Doug lives in the KC metro and is one of only three people in the world to earn the distinction of Master Sommelier and Master of Wine. USA Today actually wrote of him, "Frost likely knows as much as anyone in the world about how to make, market, serve and identify wines." Not surprisingly Doug was responsible for the winetails. I'm sure I'm not being fair here but in general Missouri wines usually leave me a little wanting. Frankly (generalizing here) the $20 I spend on a mediocre bottle of Missouri Norton can buy me a much tastier California, Oregon, or Argentine red. Kudos to Frost however for incorporating local wines into all his winetails. When it worked (as it most often did) it worked quite well. I was especially fond of the Missouri Mule a riff on the classic Moscow Mule (vodka, ginger beer, lime). Frost uses a sparkling wine from Missouri's Les Bourgeois Vineyards and adds ginger syrup, sherry, rum and lime (recipe below).

On the beertail side of things we had Adam Seger. Seger is the creator of hum and balsam spirits and runs the cocktail programs for iPic Luxury movie theatres in the US and for WOOBAR at The W Singapore Sentosa Cove in Asia. This guy knows his way around a bar and is at the forefront of the beertail trend. Wondering whether this beertail thing was just a fad or a trend with legs, I put the question to Seger. "Beertails are a sustainable trend that is at the convergence of the craft beer movement and the cocktail renaissance," he explained.  "As bartenders and mixologists are looking for new, high quality ingredients, they are now looking more and more at craft beer. Add to this the increasing awareness that beer is the most chemically complex alcoholic beverage in the world and you have a perfect storm. Beer also adds a texture and a light mouthfeel to a cocktail, details that are more and more appreciated as guests seek new experiences." Makes sense to me.

I appreciated all the beertails but asked Seger for the recipe for the Dark & Stoutly, modeled after the Dark & Stormy (dark rum, ginger beer, lime), as it seemed the most approachable for the home mixologist. The recipe is also below. 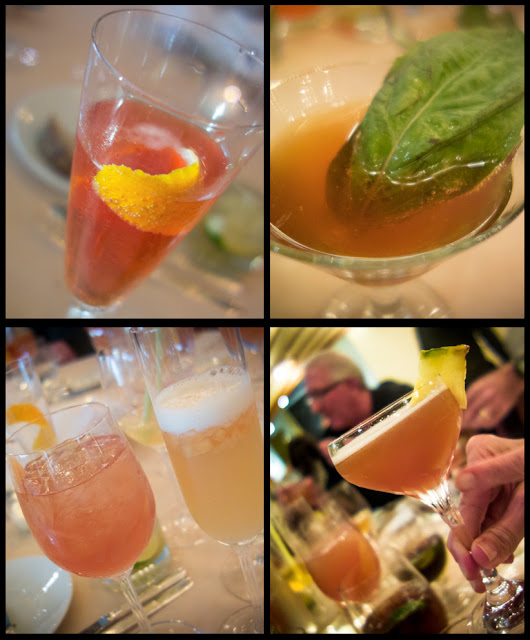 Email ThisBlogThis!Share to TwitterShare to FacebookShare to Pinterest
Labels: Cocktail, Drink, Paris of the Plains, The American Restaurant