This week Chef Howard Hanna of The Rieger Hotel Grill & Exchange was named a semifinalist for a James Beard Award - Best Chef: Midwest Category. Here in Kansas City he is joined by the very talented Ted Habiger of Room 39 (also Best Chef: Midwest) and Nick Wesemann of The American Restaurant (Outstanding Pastry Chef Category). Hearty congratulations to all three.


Seeing Howard Hanna on the James Beard semifinalist list reminded me that I've never properly and publicly appreciated his terrific Crossroads restaurant. I'm not sure why I've never written about Howard or The Rieger but this occasion seems like all the reason in the world to share my 8 reasons that this chef and his restaurant are among my very favorites.

If you've never been, let me start by telling you that there's no hotel. There was a hotel but that was nearly a century ago. However, much of the original architecture, details, and fixtures remain in this shotgun-style space lending the restaurant a great deal of it's charm.

Eight Reasons (In No Particular Order) 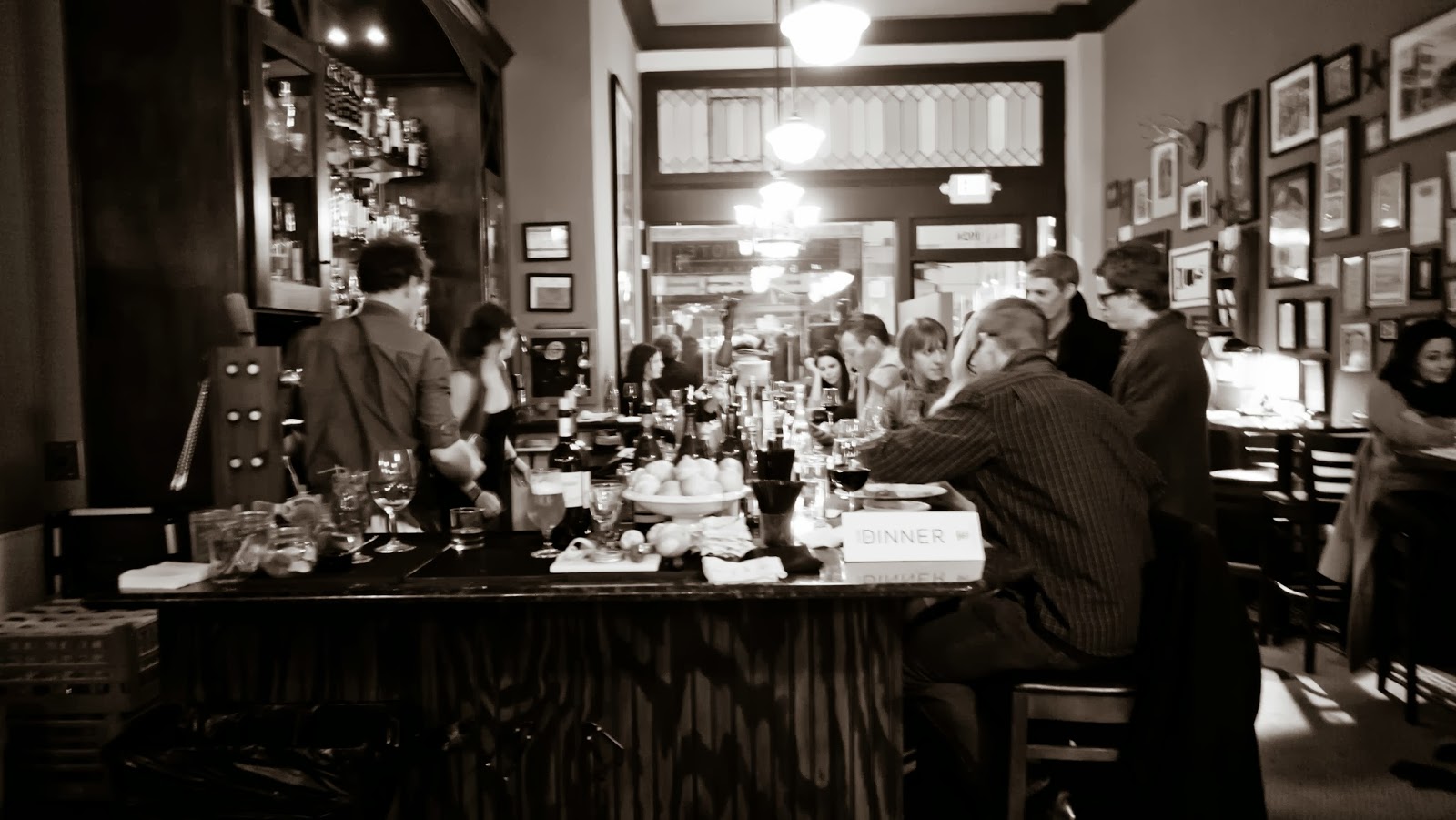 It's not a particularly large bar but it is a particularly good bar. As you enter the restaurant you land squarely in the bar area which seats about a dozen but can can get three-deep at busy times. Great cocktails (see below), a good selection of wines and some solid draft beers will keep you lubricated whether you're waiting for a table, a taxi, or the late night crowd that often gravitates here.

Pro Tip: If you have to stand, try to do it between the bar and the alcove immediately to the right as you enter the restaurant. A little more elbow room and you won't be continuously bumped by diners as they head to their tables.

The Drinks
And by drinks I mean cocktails. There are some very good cocktails being made in Kansas City right now. Some of the best are here. Sure, everyone has their riff on the classics but here they make sense. My favorites include the Pendergast and the Columbus Park with nods to the Manhattan and Boulevardier respectively. Some drinks change seasonally and are always worth a try. Pictured here is a Downstairs Mixup from last summer - Mezcal, strawberry-lemongrass syrup, lemon, orange. Tasty.

The Front of the House
The Rieger's General Manager Tony Glamcevski keeps the front of the house running liked a well oiled machine. Hostesses and servers are among the best in the city (Sarah Beets, who sadly is leaving the KC area soon, was named server of the year in 2013). A couple of pet peeves of mine are rarely violated here. Servers know what's on the menu and why. Utensils and plates are cleared between courses. It's the little things, no?


A Great Vibe
This falls squarely in je ne sais quoi territory but it's easy to get lost in the moment here on a bustling weekend night. There's an energy that feels like some of my favorite dining places in much bigger cities. I don't know how to define it but I know it (and like it) when I see it.

Pro Tip: It gets a little noisy sometimes. My 48-year-old ears still manage but carrying on a conversation with my parents would be challenging on a busy night (beyond that I would love to take you here sometime Mom & Dad!).

The Chef's Counter
Chef Hanna has an open kitchen at the back of the space that is separated from the dining tables by a counter that seats about 12. I'm pretty certain it's first come first served there and it's worth the effort. You're just a couple feet away from the action and there's plenty to see. You do like fire, right? This is where you'll usually find Chef Hanna dutifully conducting the kitchen's choreography. Always fun.

Pro Tip: I've never had trouble getting a seat at the counter after 9:00 PM. A perfect stop on a night of midtown table hopping.

Table for Two, Four, Six, Eight?
I think the only party size I've never tried here is the table for one (and that's because I've got a contract with a very lovely lady that enjoys eating as much as I do). Anyway, whether you're having a special romantic dinner for two or getting a crowd of friends together to share plates and kill a few bottles of wine this is a fine place to do it.


They Still Know How to Have Fun
Despite serving some of Kansas City's best fare it's never stuffy. When Chef Hanna added a bone marrow appetizer to the menu last fall I jokingly said I'd only order one if I could do a Bourbon/Bone luge with the bone afterward. Within moments of finishing it there was a shot of Jack Daniels at my elbow and a very encouraging chef taking photos of me.

Pro Tip: It is impossible to look good in a photo while you are doing a bone luge.


The Chef and His Food
Finally, and obviously, there's the food. Chef Hanna and his kitchen team turn out some truly imaginative and delicious plates. It's certainly meat centric - and that's fine with me. What's unique is the regular use of small game (rabbit is a favorite) and lesser known, but wonderful cuts of meat (beef cheeks, bone marrow, spicy beef tendon). There's always a good fish offering - I had Spanish Mackerel recently (no one offers mackerel) and I couldn't get enough. I hear the vegetarian options (usually one or two beyond salad) are solid but I'm usually not in that kind of mood once I set foot inside The Rieger. But that's me.

I'll close with some food shots and short descriptions. Note that some of these items are no longer on the current menu.

Put The Rieger on your list and wish Chef Hanna congratulations when you see him.