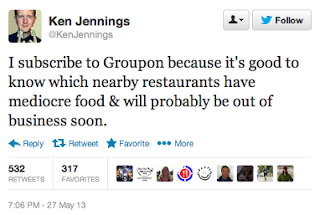 Unless you follow the foodie press you probably missed last week's Twitterverse chatter related to former Jeopardy champ Ken Jennings' Groupon dis. His post is pictured here and is pretty self-explanatory.  Now, Ken Jennings' opinion on where he eats and why don't mean much to me but his tweet did get a lot of attention and got me thinking about Kansas City diners' attitudes about Groupon (and similar deal-of-the-day companies).

Let's start with the assumptions in Mr Jennings' tweet...


Assumption 1: Restaurants using Groupon must have mediocre food.
Kansas City Reality: Here in KC we are very lucky that some of the very best restaurants in town routinely participate in Groupon-like promotions. In the past year alone these have included:

There are two James Beard award winning chefs on that list (Colby Garrelts of Bluestem and Michael Smith). All are critically acclaimed. None mediocre.

So why use Groupon if you are already nationally acclaimed? One reason, according to Bluestem Owner/Pastry Chef Megan Garrelts, is to attract new customers that haven't discovered you yet. "We hope to bolster sales and while doing that show the restaurant to guests that might not normally eat with us, the discount does help". That said, it's still a fine line as Garrelts admits, "I must say we do these deals with caution so not to hurt our brand since we are know as an upscale restaurant."

Assumption 2: Restaurants Using Groupon must be desperate for business.
Kansas City Reality: All restaurants need business. This is actually true just about anywhere though there are obvious outliers in cities like Chicago, New York, etc... where a precious few restaurants are booked solid for many months. The locally owned and independent restaurant business is famously difficult. Restaurants are always looking for a way to cut through the noise and attract new and repeat customers.

I took this question to Pete Peterman, Owner/Chef at Peanches (related post), to get his take on using Groupon as a new restaurant. Peterman actually used Groupon on his opening day to help get the word out. As he related to me, "It was successful for me because it connected with old customers from my last two restaurants (Sour Octopus and S.O. Redux)." According to Peterman his offer landed in "nearly 225,000" e-mail inboxes. Once a customer tries his place for the first time it's up to him and his staff to make the experience worthy of a return. "I have about a 70 percent repeat from Groupon", he said going on to describe the customer that started by buying two offers "...then the second time he brought five. He came in for five weeks straight. He's been back six more times. That was over a four month span".

Which brings me to using Groupon at a restaurant where you are a regular. I will be the first to admit feeling sheepish about this. I guess I'm somehow afraid that I'm taking advantage of my friends (and I do count the owners of some of my favorite restaurants among my friends). You might feel that way too. Don't says Megan Garrelts. When I posed the question to her she replied, "Regulars do use our Groupons and we love it. (It) gives them a reward in a sense." And that was nice to hear. And not all surprising that it comes from one of Kansas City's most successful restauranteurs.

My advice? Use Groupon (and Google Offers) whenever possible to:


Just remember your server. Gratuity is always, always calculated on the amount before the discount.