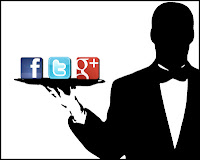 Here we are, with both feet in the new millennium, and I am amazed at the number of restaurants (some of my favorites in fact) that still have little or no presence in social media. Even worse, many are doing such a poor job of using Facebook, Twitter, Instagram, etc... that their pleas for attention are likely met with feelings of pity.

This is on my mind today as I look out the window at what is likely to become well over a foot of snow falling furiously from the sky.
Kudos to nearly all area restaurants (that I follow anyway) for using Facebook and Twitter to announce their snow day closures and in a few rare cases (nice work, Rieger Hotel & Exchange) the fact that they are remaining open through snowmageddon.

As long as you're closed anyway, why not leverage the same social media you used to announce closing to engage those same customers? Judging from Facebook and Twitter activity today it's pretty obvious that a lot of Kansas Citians had more time on their hands than usual.

Happily, some establishments do get it and I wouldn't be surprised to learn that they also have a loyal and engaged customer base. Here are a couple of good examples:

Boulevard Brewing Company did a riff on the "yardstick in the snow" photo (below), allowing followers of their Instagram and Facebook feeds to watch the snowfall accumulate in relation to the height of two bottles of their famous ales. This is a super clever posting technique as it encourages their followers to come back on their own and see the progress.


I'm sure the good (and clever) folks at Snow & Company, one of the Crossroads Arts District's more innovative watering holes, feel a certain amount of pressure to live up to their name and turn a snow event into a Snow & Company event. They're posting photos of their followers' submitted snowpeeps. 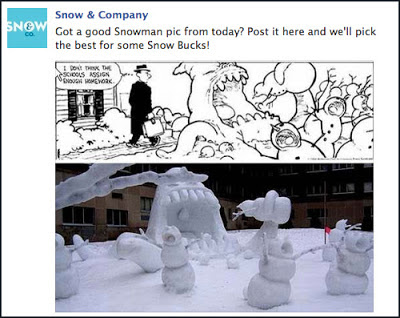 Of course, you don't need an extreme weather event to do social media well. Smart engagement should be happening every day. The smartest establishments are driving business through full adoption of social media promotions. My favorite right now? That would be Bier Station in Waldo. True to their Euro-train station theme these guys tweet every time a new draft beer arrives and when it departs. No more wondering what's on tap!


So, who did I miss? Are you following a restaurant, watering hole, or other culinary establishment that does social right? Let me know...