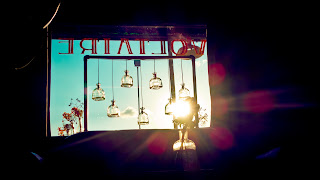 ❝Nothing would be more tiresome than eating and drinking if God had not made them a pleasure as well as a necessity.❞

Give God his due but I would also send proper respect to chefs and bartenders - especially the kind you find at Voltaire's namesake restaurant newly opened in the West Bottoms. Fans of R Bar, which closed just over a year ago, will be happy to learn that its replacement tenant appears to be living up to some important standards - namely an interesting and tasty menu as well as imaginative quality cocktails. 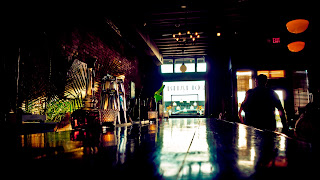 Voltaire (no meaningful website yet but here's their Facebook) opened last Wednesday and is run by Moxie Catering owners Jill Myers and Wes Gartner. We visited Saturday evening after enjoying some local wine at Amigoni Winery's anniversary open house. With not much going on in the West Bottoms on Saturday night and the word-of-mouth of this opening not yet under way, we had a lot of seating choices. We chose the bar. I love this bar. It's long (like the restaurant itself) and old fashioned in a turn of the century (20th, not 21st) kind of way. Dark wood, mirrors, lots of bottom-lit bottles. Speaking of last century... background music comes by way of vinyl - an old school turntable playing LP's behind the bar.

The cocktail menu looked strong and glancing down to the other end of the bar we got a clue of what we were in for. We immediately recognized head bartender Ryan Miller from his stint at, now closed, The Boot in Westport. Always a fan of his cocktails (and sangria by the way) at The Boot we were anxious to see what was in store here. I started with a Kansas City Sour (Old Fitzgerald bonded Bourbon, smoked lemon juice, demara, claret). I assume what makes it a Kansas City Sour is the smoked lemon juice - a subtle but elegant touch to what would otherwise be a very good New York Sour (fwiw... the float of red wine on top differentiates a New York Sour from a traditional Whiskey Sour). My companion ordered a Stockyard Fix (Tito's Handmade Vodka infused with ginger, fresh juice and bitters). At the risk of typecasting it as a girlie drink I will note that she enjoyed more than one as did several lady friends that wandered in a little later. Full disclosure: I liked it too, but I'm not going vodka (even Tito's) when there's really good Bourbon to be had.

Bar manager Jamie Zoeller introduced himself and presented some dinner menus. Much like the old R Bar the dinner menu looks deceptively small - mostly small plates ranging from $6 to $16. The kitchen is manned by chef/owner Wes Gartner and sous chef Ryan Holopter. I'm told the menu will change fairly often - especially to reflect the seasonality of fresh, local ingredients.

Quick takes on our food:
There's plenty on the menu that looked inviting but two people can eat only so much. Next time.

I hope they fill some seats here. It's definitely a destination though I recently learned that Dead Girl Derby roller derby (!) takes place at the usually quiet Kemper Arena across the street.  That could be fun.