Whatever Debbie Gold Is Up To, I Promise To Pay More Attention This Time 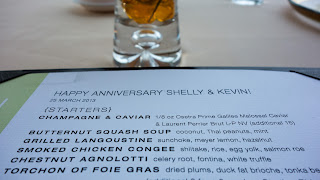 This was supposed to be a blog post about the amazing dinner Shelly and I experienced at The American Restaurant when we celebrated our anniversary several weeks ago. It was going to go something like this:

Things can change fast. Just this week Ms. Gold pulled a fast one and announced her upcoming departure from The American. Where she's going next is super double secret spy stuff and known only to those who know. Suffice it to say however, this time I will pay more attention and not ignore this local talent.

I'll save the yadda, yadda, yadda for Debbie's new digs and whatever The American does post-DG.

But you still want photos. And here they are: