On Board at Louie's Wine Dive 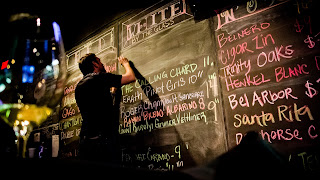 I'm not going to lie. When I first heard that this place was going to be called Louie's Wine Dive I was less than enthusiastic. Wine Dive just sounded a little to hipster for me - and I'm more than tired of the hipster business ethic that seems to be based on inattentive service by brooding, bearded twenty-somethings. My misgivings faded when I read some of the pre-opening press and learned that many of their menu items included meats from Local Pig. I immediately put them on my list.

They've obviously found an audience. When Shelly and I visited soon after their opening in October 2012 there was a medium crowd - busy, but far from full.  We returned in December and it was decidedly more popular. Immediate seating but not much. Then, in an attempt to take some friends on a cold January Saturday night, we faced a 90-minute wait for a table at 7:30 PM. Good for Louie's. Bad for us. We moved on.

This past Saturday we were back - this time arriving on the early side of evening in order to watch a 6:00 PM March Madness basketball game at the bar. As luck would have it we found two seats at the bar directly in front of one of their two TVs. Interesting observation: This place fills and slows in waves. Standing room only one moment, thirty minutes later there are bar tables available.

So, what's all the fuss about? From my perspective Louie's Wine Dive is doing more than a few things right:


Let's start with the food. I've already mentioned that their beef and pork are sourced from Alex Pope's Local Pig (related: New York Times Features Alex Pope of Local Pig). That's attention to detail and quality that should not be overlooked. The Four-Pork Gnocchi (La Quercia prosciutto, pork shoulder, ground pork and Italian sausage slow cooked in red wine and cream and served over pan seared gnocchi) is so full of flavor and wonderful textures you want to head back to the kitchen for seconds. I also enjoyed the Porchetta (white wine braised pork shoulder stuffed with La Quercia prosciutto and fresh herbs) - another standout pork dishe that should not be passed up. Shelly orders the Shrimp Diablo (photo above right) every time and, like me, is never disappointed. The shrimp is always perfectly cooked and the Sriracha adds just enough kick to the tomato cream sauce to keep it interesting.

If you're just going for drinks and bar food don't pass up the Lobster Poutine (photo at right). The fries are good enough to stand on their own but when smothered in lobster and mushrooms? Tasty. My only quibble here is the poutine can accurately be described as wet. The flavor doesn't suffer though and you'll just want to use a fork for those last remaining fries at the bottom of the bowl.

On to the wine. I've heard it said that Louie's wine list is not particularly special and that observation has merit - on the surface anyway. Louie's approach to wine offerings - both on and off the published list - is what makes it fun.

Directly behind the bar you will find a wall that is essentially three large chalkboard panels. By large I mean grown men need a step-stool to reach the top. These three panels represent categories titled Red, White, and Now. Red and White are featured, off-list, wines being offered by the glass. I don't know the exact criteria for wines that make it to these two boards but have been there enough to admire the changing selections. In December I was able to buy a glass of one of Dick Vermeil's wines that is normally outside my pain point when priced by the bottle. This is also the manner in which I first tasted Orin Swift's "F" red wine. Despite being a very nice and reasonably priced French wine it can be difficult to find in Kansas City.

So, what about that Now board? These are wines that aren't generally offered by the glass. However, any guest that commits to two glasses of wine can get a "by the bottle" wine poured by the glass. What happens if said guest stops at two glasses? The rest of the bottle finds its way to the Now board for other customers to buy by the glass. On our most recent visit this board included a Ken Wright "Willamette" Pinot Noir (on the wine list at $69/bottle) for $17/glass. A pricey glass for sure but at least you get an opportunity to taste it before making a commitment. For the record, most wines on the board are between $8 and $12 a glass and it's not unusual to find a few around $6.


It should be noted that Louie's also offers a small selection of featured cocktails as well as beer. Honestly, it will be quite a few more visits before I'll feel the need to drink beyond their wines.

Service is generally quite good. In fact there seem to be more servers and bartenders than feels necessary (and no brooding, bearded hipsters). Friendliness and attentiveness are far better than average. One word of caution here: Some of the servers are confident beyond their actual knowledge of the wines they are pouring. Relatively small mistakes like Spanish wines referred to as French, Chilean described as Argentine, etc... Keep it in perspective - you're there to have fun, not get an education.

Though it certainly skews toward late 20-30 somethings, all ages are represented in the dinner crowd (read: I wasn't the oldest guy in the room nor did I feel out of place). Noise level can be an issue for some. If you're with a group of four or more and the place is shoulder-to-shoulder you'll be lip reading. For me, that's part of what makes it fun. Dive in.