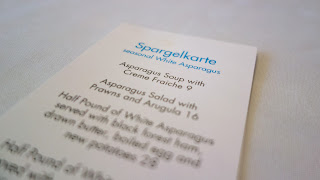 It's probably been 25 years now, the first time I traveled to Munich, Germany. At the time, as a young man traveling on business, I'm sure it was good Bavarian beer that I was looking forward to. Looking back however, it was the German asparagus that I remember most. It was late April, maybe early May and I didn't know it at the time but I was stepping into a magical culinary window of time in Germany known as Spargel Season. Walk through the center of town in any German city this time of year and large chalkboards in front of every restaurant herald the arrival of spargel in a long list of dinner specials built around the celebrity vegetable. "Was ist spargel? (What is spargel?)" I asked in a poorly accented German that only an American can manage. The friendly restauranteur whose English was worse than my German gestured enthusiastically with his hands for me to follow him into his establishment. Once inside he proudly pointed to a simple dish containing several fat, white (admittedly phallic) spears the likes of which I did not recognize. "Spargel!" he said triumphantly. I shrugged my shoulders, still confused, and asked to be seated. I ate spargel for three days straight. 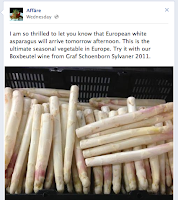 Spargel of course is white asparagus. You already know that because you are far more sophisticated than I was several decades ago. You also get to see Facebook updates like the one pictured here and recently posted by Kansas City modern-German restaurant Affäre. The secret is out.

Within minutes of seeing this post I was on to Open Table and snagged a Friday night seating for me and my wife Shelly. Date night with asparagus!

Affäre is located in the Crossroads at 1911 Main Street. As mentioned above they describe themselves as a modern-German restuarant. For me that seems to mean classic German ingredients with French preparation and presentation. This was my fourth visit to Affäre since they opened almost a year ago. Small plates rule the menu and provide an opportunity to really sample what chef/owner Martin Heuser has to offer.

But we were talking about asparagus, right? As delicious and popular as white asparagus is, it is nearly impossible to source in the US. Nearly all the world's spargel is grown in Europe, with Germany and France producing the best. Affäre is flying spargel in to Kansas City from France every day at the moment (even a good German will admit the French asparagus is the best around). By the way, white and green asparagus start out as the same plant. To make it grow white, farmers deprive the plant of light by mounding dirt around the stalk as it grows. No light = no green. Once fully grown, each stalk is harvested by hand. So, before it lands on your plate, Affäre's asparagus starts in France, is doted on by French farmers, delicately harvested, boxed, and given a business-class seat on Air France straight to Kansas City. OK, I made that last bit up, but now you see that it's no easy feat putting quality spargel on the menu.

Sommelier/Owner Katrin Heuser (wife of Chef Martin) helped us choose a Baumard Clos du Papillon from the Savennières region in France to accompany our meal. It was a good choice that met our flavor preferences, carried the asparagus nicely, and paired well with dishes ranging from prawns to seared veal steak. The Spargelkarte (asparagus menu) also includes suggested wine pairings.

Katrin reminded us that they will serve the asparagus menu only as long as good quality spargel is available. No guarantees here. That could be three weeks or five. Or something else. If you're ready to indulge, don't wait.